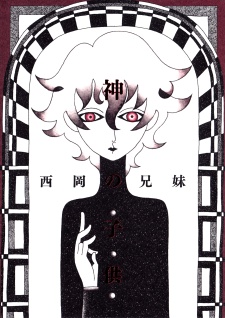 Kami no Kodomo
(Child of God)

I've seen this manga 2 times on my Neocities dashboard, which I thought "huh that's weird. It's that popular?" Even if 2 times isn't a lot, it seemed a lot to me because the time gap between me seeing them is small.

So yeah anyway I read it, cuz the art style is cool!! It's the weird, not-at-all-anime, mega surreal (that's it!) And you know~ I'm all for that weird crap and art styles that look like crap but gets called "amazing" and "unique" cuz it's just "mega stylized." It's cool, it's cool~

Um!! So about it... it was pretty disturbing! Like.. duh! Actually I didn't pay that much mind to the "Psych horror" label and warning tags.. I mean I do like psych horror! And when I saw the manga being listed as that I was like "ooooh interesting!" But I just didn't expect the manga to have ~that~ type of psych horror... I mean I guess it was kind of careless of me, but whatever... It's not the first time I've read something like this anyway... I just wasn't mentally prepared this time! I did read all of it in one sitting lol (the content warnings are on the left side!)

The art seems to be inspired by European medieval art(?) There are a lot of European influences; most obvious one is the use of religious symbols in the art and story. The manga is fairly short-- it has 11 chapters, and I think the ending is pretty satisfying. The ending also implies some sort of loop, which I think is kinda cool

For a psych horror I was expecting more actual psychological horror and not just gore and s*x and constant religious references. I didn't really feel any emotion when reading it other than "wow that's gross I hope nobody walks in my room while I read this." I wouldn't really recommend reading unless you're feeling a bit spicy and you want to see stuff.