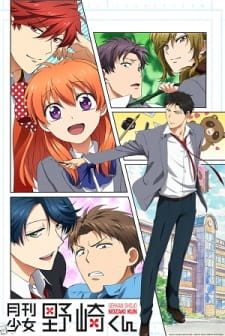 Has a manga?: yes

My rating: 10/10! Laughed a lot, but it's been so long since I have watched it so my rating is kinda outdated. I plan to rewatch it one day!

I think this is the first anime I have ever watched? Nozaki-kun is a comedy romance anime and it's really funny :P So basically, there's this girl who has a crush on this hella dense manga author! So she tries to get closer with him blah blah she gets to meet his weird friends! The story is basic but it's sooo funny! This is the anime where the "boy and girl running through the rain using the boy's jacket as an umbrella cuz they got none" and the "expectations: romantic walk under the umbrella vs reality: rain pouring on the orange girl's head cuz of oblivious partner" memes came from. Sadly it only has 1 season, with 12 episodes. There's also a manga and a movie, I think, but I never watched it

I was in 6th grade when I first watched it. Also, people say that the dub is better than the sub! So yeah, I watched the dub, and it was really funny alright, but I didn't watch the sub so I can't compare??!! Mmm, I think the explanation behind is that the jokes land better if it's said in a language you can understand! Whatever, whatever

I think, Mikoto Mikoshiba (redhead) and Yuu Kashima (bluehead) are my favorite characters!