So why do I like this loser? Why do I like him so much that I created a page dedicated to just him?

I love love looove robots! In fact I chose to start Danganronpa with V3 because I heard it has the Ultimate Robot! I really like his eyes! And he looks cute and cartoony and angry all the time! He looks so silly! He also looks chunky so he's somewhat huggable!

When I was new to V3, I realized that "oh this robot guy actually sucks" and I actually disliked Keebo. I mean I still thought he was cute! Cute as in... "oh he's so pathetic! haha! Silly robot" but the "stupid robot! let's make fun of him" gag didn't really latch on me. I didn't like it when people made fun of Keebo. But I sort of can't blame the bullies, cuz Keebo's really was disappointing. I convinced myself to hate him because seeing him get bullied felt terrible. I pity him so much. He would probably get picked last in gym class.

Spoilers in hidden text!!! I'm upset that he only got relevant towards the end. That's the saddest part. Everyone just made fun of him for the first couple chapters! I hate it!!!!!! so much. I mean, I understand he's the audience surrogate and the writers were saving it for the twist at the end. But it felt kinda odd and random. Like maybe they should've made Keebo act out at times. Also Keebo aka audience as the rival sounds interesting! Also..... He didn't have to die!!!!!!!!!!!!! End of hidden text

The Ultimate Robot could really have been utilized better. Keebo is such a cool concept. Imagine protagonist Keebo!

I only really like him for his design and aesthetic. He's funny when he misunderstands human interactions (but not when people make fun of him!) and I like his confidence! But the way the story used him blew it for me. 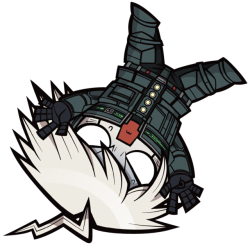