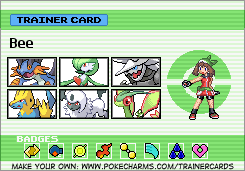 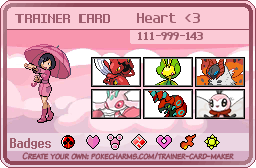 I used to go by the name "Bee"

This is my team I fought the E4 with in my second playthrough (the one that mattered the most to me). I have a lot more stored in my box that I used for Battle Frontier. All of them have nicknames that I brainsormed real hard for. I love them and I miss them a lot!

I feel terrible since I remember there being so many Pokemon in my "love <3" box in the PC and I could only remember a few but prominent ones. I can't find the notebook where I wrote all my Pokemons' names! I'm a terrible parent..

Introducing the real Champions of Hoenn (in order of when they joined the party):

Name origin: Cobalt is a blue metal! Swampert is blue

Cobalt is my starter! We've been through many victories and many defeats. I can always rely on him. He's extremely tanky and hits reaaaally hard with Return! He can also drown you to death with a single Surf and send you back to hell with Earthquake. He's like the big brother of the team. If the others are in a hot seat, Cobalt is always there to change the tide of battle.

Fun fact: his nature is Docile and his Beauty condition is maxed out!

My message to Cobalt: You're very special to me and even if I left you in the box and brought other pokemon to the Frontier, I still love you! you're not scary you're cute n chubby and strong!

Name origin: Blue like lapis! I unintentionally mispelled his name but I didn't correct it anymore since it's what makes Lapiz special

Lapiz was the bird type of my team in the early game. He's a hard hitter but he's also really fragile. There was a point in time when he was the weakest in the team. I had no choice but to leave him in the box so he doesn't faint any more in battle. He knows it was for his own good. He's still well-respected and admired by my other pokemon.

My message to Lapis: To the most handsome birdie in the universe, thank you for helping me grow! ily&imy<3

Name origin: Sardonyx is a type of shiny rock, also I was a big fan of Steven Universe. The name has some feeling of glam to it

Sardonyx is our big girl! She's strong and tough and her looks will leave you trembling with awe! Although despite her appearance, Sardonyx is one well-mannered rock. She's very careful of her actions and puts others before herself. Sardonyx is like the big sister of the team!

Fun fact: Sardonyx is a regular competitor in the Battle Frontier!

My message to Sardonyx: We thank you for all your efforts! Thank you for holding of against Drake's pokemon. ily&imy<3!

My trusty doggy! Extremely fast and extremely dangerous! Water and Flying types better watch out! Neo and Lapiz have much in common in terms of their role in battle. Though I remember Neo being bulkier than Lapiz. If I wanted to quickly go through battles to train my weaker Pokemon, Neo is the first one I turn to.

Fun fact: Neo and Fey are the "second in command" of the team next to Cobalt! They're also really good friends.

My message to Neo: Thanks for protecting the team from Tentacruels! Who's a good boy? ily&imy<3

Name origin: the Fey sisters from Ace Attorney! also Fey sounds a lot like a fairy name to me (even if Gardevoir was pure psychic in G3, it still looks very fairy-ish)

Fey is second in command along with Neo (and formerly, Lapiz). She manages to be bulky while also being a threat to the enemy (thanks to Calm Mind!) She's another one of those big sister types of the team, but a bit more... pretentious? XD (don't tell her I said that!) She and Sardonyx are the definition of elegance at every shape.
Fun fact: She was hatched from the Daycare. Fey is nonbinary coded!

My message to Fey: I saw you in my dreams girl o///o you were stunning (ily&imy<3)

Name origin: I think "Angel" is a gender neutral name! It's also really cool on a Dark type Pokemon

Dog? Cat? Whatever! Angel was the coolest mutt/kitt on the field! He may seem aloof and indifferent but his name is not a lie, Angel is a complete sweetheart! He's just a bit shy ([Angel]:

) Angel is extremely loyal and makes sure everyone is safe at night.

Fun fact: Angel helped me express myself back then when I was questioning my gender!

My message to Angel: I'm a bit upset that the game gave Absol a bad learnset! I was afraid of sending you out to the battlefield because I was afraid you would faint. It doesn't mean I favor you less than the rest! ily&imy<3

Name origin: "Ant" as in the insect, and Flygon looks like a Bug type! (though it isn't for some reason :P)

In my opinion the Flygon line is one of the coolest dragon concepts (or maybe I just have a thing for bugs lol) and I could've gone for a Salamence but Flygon was too beautiful! Flygon really deserves a Mega, along with Milotic. Unfortunately, the game didn't give Antony a good learnset. I rarely sent him out since I was afraid of him fainting in case I underestimated the enemy. I would describe Antony as a gentle giant. He and Cobalt liked to play with each other a lot.

My message to Antony: Flying around with you was fun! ily&imy<3

My other prized Pokemon:

Name origin: "Lemon" has a playful summer feel to it and Lemon is very energetic and cheery so I thought it would fit

Lemon is another one of the Pokemon I worked very hard on along with Fey and Antony. He hatched in the Daycare and lived a huge part of his life as a Shroomish there. Lemon is one of my strongest Pokemon. Thanks to Spore and Swords Dance, he can sweep the entire E4 with Mach Punch! Lemon is a very well-known Battle Frontier star. He may be over-confident at times, but his positive nature is what keeps the team's morale high.

Fun fact: Lemon won me 3 Golden Symbols in the Battle Frontier! He also has a sister named Roku

My message to Lemon: We'll all be together again one day! Keep on shining! ily&imy<3

Name Origin: All of these names are joke names :P

I was just messing around with my brother and I told him I would bring a full team of Crobats to the Battle Frontier. That's when the Legendary COOLBAT team (ft. SOG) was formed! Despite what one might think, COOLBAT and co. ft. SOG make a great team! They even won quite a number of battle in the Frontier! This caused me to get emotionally attached to them, but mostly to COOLBAT. COOLBAT and co. ft. SOG taught me that any Pokemon is a strong Pokemon if the trainer loves them enough.

(SOG wasn't really that important to me, ngl. Walrein is pretty ugly!)

My message to COOLBAT and co. ft. SOG: You'll forever be in my heart! ily&imy<3

This is my Pokemon dream team that I had formed across several Pokemon bots on Discord! Lotsa buggy fellers here, mhm mhm!
I luv em buggy wuggies

I was training this team for competitive battling which honestly was really difficult because a lot of the members are just there because I think they look nice! Also I'm not so clever in the battling strategies part

Name origin: Choosing a name for my scizor was really hard... but Reaper is such a perfect name! It sounds cool, dark, and like death, Reaper is quiet and red... hehe lolzies

Scizor is my favorite Pokemon! Its design is so simple yet so cool! I was so happy when I caught Reaper in Mewbot! Reaper is my main battle Pokemon! He's really strong and he's able to beat some legendaries with a single Bullet Punch! (with Swords Dance ofc :P) He likes to battle but I don't allow him to go that much because I'm worried that he might start melting because of his Mega form!

Name origin: namu means "tree" in Korean! I thought the name was short and sweet and home-y

Namu is our leaf mommy! She cares for everyone in the team! You can trust her to babysit your children! She's gonna wrap them in leaves!

Fun fact: She has an interest in fashion and tailoring! She is also a mother to 4 darling sewaddles

Name origin: kiki do you love me was playing on the radio and I thought Kiki was a cute name

Kiki is the strongest in the team! She's almost a pseudo-legendary. She's really weak to rocks though! I don't send her out that much because she makes every battle too easy (except against her weaknesses XD)

I love orchid manstises! It mixes 2 cool ideas- mantises and flowers- into one! And lurantis is pink too! Azuki is really quiet and somewhat timid. She's a bit scared of the other bugs in the team. She likes to stay close to me and follow me around. Unfortunately Reaper likes to do that too! It seems that Azuki and Namu get along nicely. She is also trying to gain courage to not avoid Reaper all the time.

Vice is special... I caught him and I was shocked to discover that he had really high IVs! He's huge and I like to cuddle and ride him! He doesn't like to battle that much which I don't mind. I'd rather see him happy in the wild where he has a family! He likes to visit me often and give me rides to my destination.

Fun fact: Vice wasn't a shiny when I caught him! Due to some error in Mewbot (the pokemon Discord bot) I lost Vice! But when the bot's staff got him back to me he was a shiny!

Tinkerbee is very cute and also very fierce! She loves acting tough and likes to taunt the enemy! She's also really smart, so if the opponent gets pissed, she'll just dodge the attack and make a fool out of them! She can be very mischievous at times and love to pull pranks on the team. Her favorite victims are Reaper and Vice :3

Fun fact: The Tinkerbee I have on my Mewbot account isn't a shiny and is actually still a cutiefly! I made her shiny here because it's pink XD