Pony Town is a free-to-play social game based on the My Little Pony franchise. You can play it on your computer browser or on the Pony Town app available on the app store.

The game best known for it's hella impressive character customization. It also allows you to build whatever you want on your own personal Party Island. The game is currently in Alpha and its latest update was version v0.90.3 as of 10-31-21.

I started playing Pony Town (PT) early in 2020 after I got banned from a MOBA game. I found it through an Instagram post and thought it was pretty cute, so I wanted to try it.

Since like, PT is just a social game, there's no actual "game" in it. I was actually expecting some sort of Club Penguin or Animal Jam type game, with minigames and stuff. Honestly, at times, PT gets hella boring. But what made me stay is the epic dress-up game part of PT.

The dress-up game part of PT was kinda overwhelming at first, but when I saw how amazing the avatars of those "pro skinners" are, I decided "hey! I want to be as good as them!" and also like, I had no other choice than to invest myself with pony-making cuz I got banned from the toxic MOBA game I was kinda addicted to! 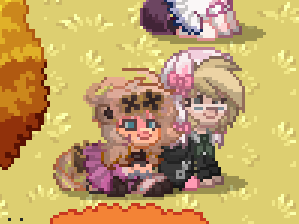 Also, another reason why I stuck to PT is the fandoms! The game map (well, really only the first ~100 blocks from spawn) has little fandom territories where fans of a certain media will "cosplay" (make a pony version of the character they choose) and hang around with other fans. Of course, I stayed because there was a Danganronpa area, and it was one of the most active fandom spots. It was a great place for young, crazy, #wacky!, crackhead danganronpa fans like me!!!! (ugh... they joked about nothing but pee and fart and semen and bald people... but I still stuck around cuz I was lonely kehehe~ There's cool people too)

Disclaimer! All of these are based on *my* experiences on Pony Town as a person who doesn't have IRL friends that play PT 8 hours a day.

Pony Town is a pretty great place to make friends and hangout. As I've said before, there are fandom territories, so hanging out at those places are your best bet.

Despite being a My Little Pony fan game, I rarely see actual MLP cosplays or OCs. Usually PT players cosplay other fandom characters or they make cats and dogs and other creatures instead of horses. There is an MLP fandom area, but it's mostly occupied by young children. Older MLP fans do exist, but they're kinda rare. You can find them at Spawn or north of Spawn.

Role-playing is the game's main feature. It's a pretty good role-playing platform, in my opinion. Illiterate RP style is the best way to go. The game also has props such as food, tools, flowers to play pretend with. PT is good for only short 1-4 hour RP sessions. Long-term RPs are a bit hard to find, but great if you have friends. RPs (and mini-games) usually take place at the Party Island. Learn more about Party Island activities here. 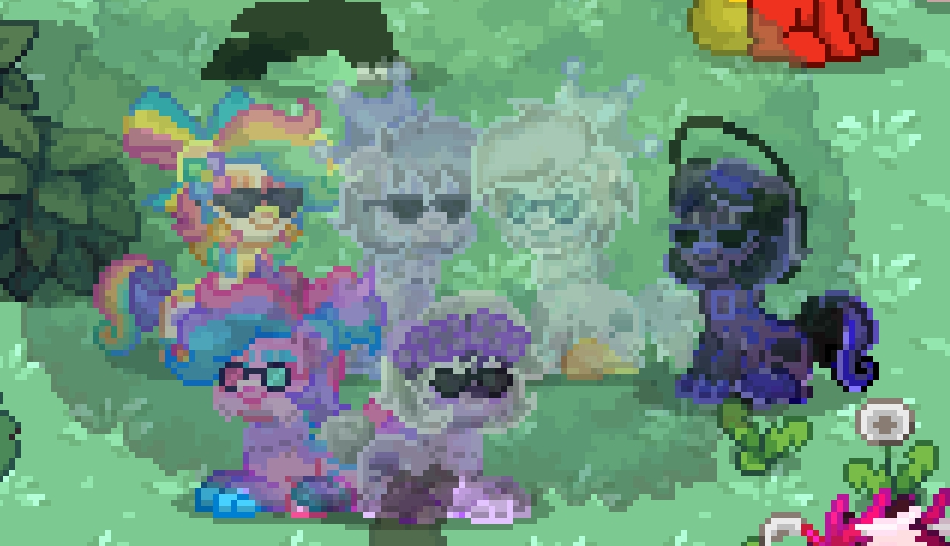 The best thing in Pony Town, in my opinion, are the species and regiments. It's one of the best ways (and the most successful method for me) to meet and make friends. It's also a really fun and cute role-play thing.

I've met a lot of friends (I think) in Pony Town. There are some stupid and annoying people some(?)times (it's more than "some" times). I play only in the PG server so I can't say anything about the 18+ server.

Pony Town is a social game, so of course, drama is inevitable. The average player age range of the PG server is about 13-15 years old. The youngest is 10 and oldest is 20 (according to the areas I usually hang out at and the people I talk to. There are kids as young as 5 playing this game, but at least they don't have the ability to understand things and start drama.) In this case when I say "people", I'm talking about only the players who are 13+ in age.

And like... who at that age has *not* been on either TikTok or Twitter, or both? They usually start the most drama. Some people even started calling Pony Town "Twitter Town" since everyone was being a sissy.

And like, these people are not rare. I've heard the 18+ server is overflowing toxic people. And, to be honest, the people who hang in 18+ server are usually just those weird Twitter kids. That rumor was been proven to be true cuz one day, the PT moderators had a mass ban in the 18+ server. They banned all the under 18 kiddos from the 18+. Good, right? Well thanks to that, those weirdos moved to PG server, like, obviously duh, and PG server was wayy more "strict" than usual. Do a little thing wrong then boom, drama.

I mean, it's good that they banned the under 18 from the 18+ server. The PG server being more toxic is just a side effect that everyone has the misfortune of experiencing.

Overall, I still like the game. I just love the pony-making part and especially the species groups. I create my OCs on Pony Town when I don't have energy or motivation to draw.

Avoiding toxic people is easy- PT has a "block" or Hide function, after all. It only needs about 4 clicks to remove someone from your screen and save yourself from the stress. Although it can be hard too, mentally. It feels so good to argue, doesn't it? But to overcome that, you just need to encounter a few more dramas, stress yourself to hell, decide you've had enough and ta dahh!~~ new mindset: immediately block all the idiots.

(Although really... I can't stay mad at everybody, so I just Mute them, teehee. Muting is like an ignore function, where I can still see their avatar but I don't see their chats :P I usually unmute them when a few days have passed.)