I started Pokemon on Generation 3 since its games were the lightest and easiest to emulate on my phone. It was also the first thing that popped up when I searched "how to play pokemon free android" :P At first I thought the Pokemon would be boring and I would drop it after a few days but I was obviously wrong since I've started a Pokemon Emerald file more than 4 times now XD Pokemon Emerald is my #1 favorite Pokemon game. I'm probably being biased because it was my first game and I have so many good memories from it. The Battle Frontier was especially fun

It's sad that the two main Emerald files which I spent 50+ hours on were both lost. I lost the first one, the file where I became champion while being a complete noob (I had a lv.15 zigzagoon [hm slave] in my team while I was fighting the E4!), because someone pick pocketed me in a mall and took my phone. I lost maybe a few family photos and memoirs but I was grieving my Pokemon file the most. The second file, the one I remember the most and had my most special and beloved pokemon, I lost due to my phone getting corrupted. I had to do a factory reset and I wasn't able to save my save file beforehand.

Losing my game twice was very painful (my team!!! D':) I tried to start a new game multiple times but it was very difficult for me to commit myself to finishing another game (tried a lot and the farthest I got in a game was badge 2) because I was too attached to my old team

Hopefully I get the motivation to play Emerald again some time in this summer vacation. Especially now that I've got a website where I can ramble about it lol. But the chances are really slim.

I remember having this really wow moment while battling Tate and Liza. I can't remember the full details but it was one of the funniest moments I had with Neo and Cobalt. I'm confused why my memory is not aligning with the Wiki. I swear it was real. Even my brother claims that he remembers me telling him.

Here's what happened: It was the 7th Gym battle. I was against Tate & Liza. I saw that the enemy had Xatu so I sent out Neo, forgetting that Claydol can easily beat Neo due to type advantage. After a few hits, Neo was already on low. I was going to switch out Neo but I accidentally made Cobalt use Earthquake. Oh no, I thought. Neo isn't going to survive this. I'm sorry Neo... Then, the miracle happened: Claydol swapped abilities with Neo (the move was Skill Swap I think) which gave Neo Levitate and Claydol lost immunity to ground type! :0 The Claydol fainted from its silly mistake and Neo was saved! He finished off Xatu with Thunderbolt before retreating. This is where my story falls apart. According to the Wiki Claydol didn't have Skill Swap.

Then how? How did Neo get Levitate? Was it just a dream I had? My brother says otherwise. Was I playing an altered Emerald ROM where Claydol had Skill Swap? I have no idea! I wish I had taken screenshots or if I did, I wish I had saved them. The event exists only as a happy memory now. 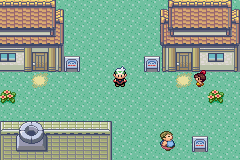 Pokemon was the very first role-playing game I have ever played. And as a young child I wasn't aware that the (I don't know how to describe it) "capabilities of the AI" or programming....something weren't that "good" and I did a lot of things based on my judgement

Like for example I was super conscious of my Pokemon. After going through an area or battling a lot I would Save and quit my game not because I don't want to play anymore but because I thought my Pokemon are tired I didn't want to overwork them. I thought that if I use my Pokemon in battle for a somewhat large number of times in battle within a short period of time, I would lose friendship points with my Pokemon.

Another instance was when I would periodically fly back to Littleroot Town and visit my mom. I thought that she would miss me since her beloved 10 year old, me, is growing up and is alway away from home battling just like his father. She must be pretty lonely, I thought. It took me a few more visits to realize that she did not have programming that makes her "miss me", and she always repeats the same dialogue whenever I visit her. It was a bit disappointing when I realized this but I continued visiting her anyway because it made me happy.